An overview of the cryptocurrency market - Tuesday, May 11

An overview of the cryptocurrency market -Tuesday, May 11 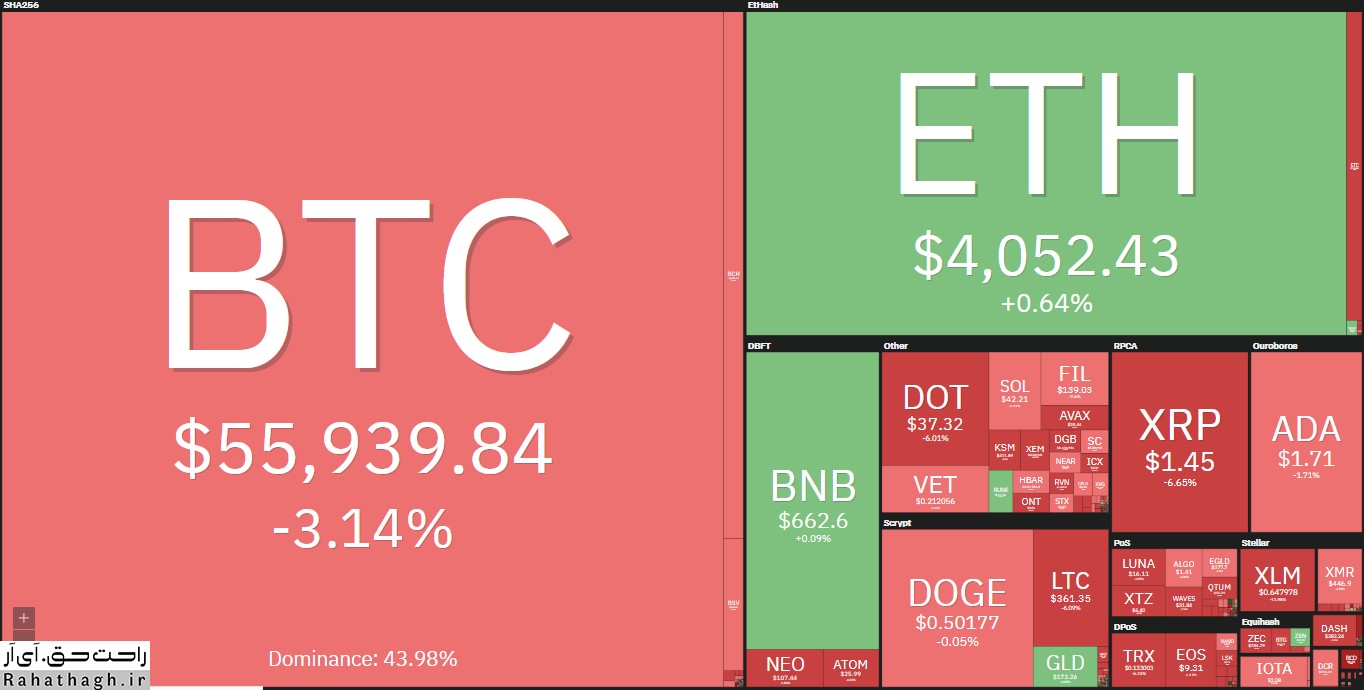 Despite the strong movements and the upward trend of the last few days, BTC has not been able to overcome the resistance of $ 60,000. As we reported yesterday, the market's top cryptocurrency hit a three-week high of $ 59,600.

As the community waited for the $ 60,000 psychological resistance to pass, the bears stepped in and took control. In the hours that followed, Bitcoin began to fall rapidly, dropping more than $ 6,000 to its lowest daily level, just below $ 53,600.

Despite a relative return and multi-thousand dollar recovery, BTC continues to show a decline of about 6% on a 24-hour scale. In addition, the currency still dominates the cryptocurrency market below 43%.

Sea of ​​Blood in the Altcoins Market

Over the past few weeks, the replacement Quinns have performed more dramatically than their leader. However, most of them have fallen sharply since yesterday.

Atrium, which has seen explosive growth at the top of all altcoins, set a record high of $ 4,200 yesterday. However, it immediately plummeted to $ 400 and reached its lowest daily price level at $ 3,800. Ether has improved slightly since then and is now trading below $ 4,000.

Dodge Quinn has fallen sharply since Ilan Mask appeared on SNL, falling another $ 11% to below $ 0.5.

Typically, after a massive market downturn, the crypto market value also fell by about $ 200 billion yesterday, now reaching over $ 2.4 trillion.

An overview of the cryptocurrency market today, May 9

An overview of the cryptocurrency market today, May 9

As reported two days ago, the bears were in complete control of the market's first cryptocurrency, lowering the price to around $ 55,000. However, Bitcoin managed to reverse its trend and gradually increase its value.

BTC reached above $ 58,000 yesterday and continued to move after a slight correction. In the last 24 hours, Bitcoin has reached the level of $ 59,600. This is the highest price of this leading cryptocurrency since the market collapsed in mid-April.

The benchmark for comparing the BTC market value with all altcoins also rose to 45% after 44% yesterday.

The Altcoin market has fluctuated sharply in recent weeks. Atrium, on top of all of them, has experienced intense price pumps. The market's second cryptocurrency broke the $ 3,000 level less than a week ago, and has now reached its all-time high of $ 3,980, setting a record.

Cardano, after setting his last record earlier this week, managed to touch the level of $ 1.73 and draw his highest price level in history. Binance Quinn has also increased to $ 650 in 24-hour timeframes.

The most important market winner today is Shiba coin. Inspired by Dodge Quinn, the token was able to enter the top 100 currencies in the market after 850% growth in one week. The currency has risen 160 percent in the last 24 hours alone.

The total market value of cryptocurrencies rose to a record $ 2.460 trillion after rising $ 60 billion in one day. 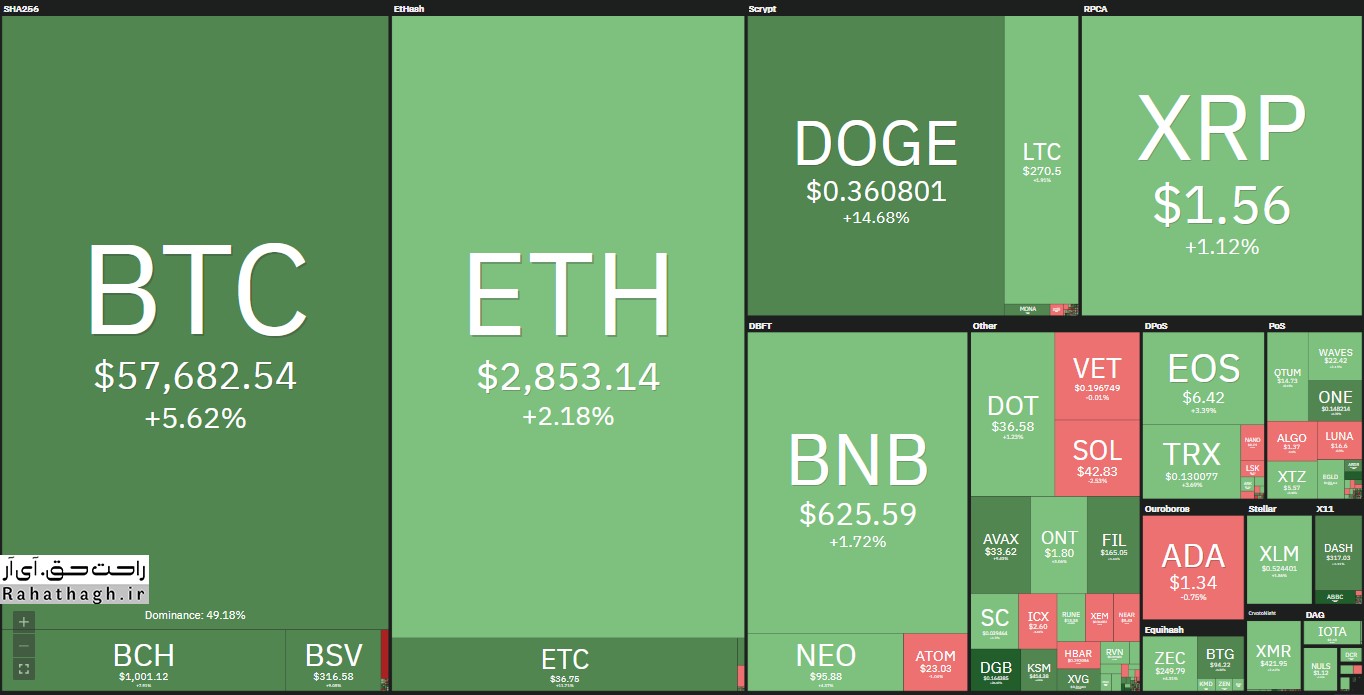 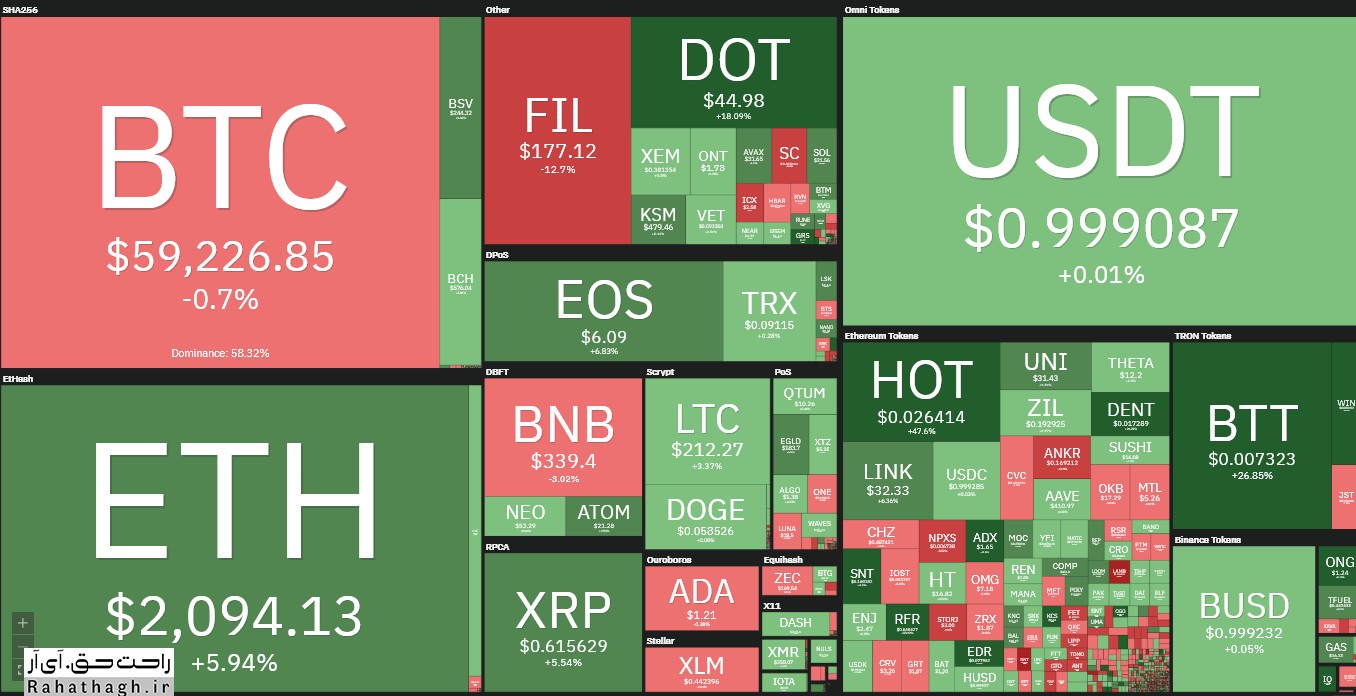 An overview of the cryptocurrency market Monday, February 22

An overview of the cryptocurrency market  Monday, February 22

The first cryptocurrency on the market had a very positive week, with the stock rising more than $ 12,000 in the past few days, from a record low of $ 46,000 to several consecutive records. The last record was set yesterday after BTC reached $ 58,400, which is currently the highest price level in the history of this currency.

However, the bears took action at this stage and did not allow the currency to rise further. Thus, within a few hours, Bitcoin lost more than $ 3,000 in value and reached $ 55,000.

However, BTC has recovered some of that lost value and is currently above the $ 56,000 mark.

Most large altcoins have started a correction process again in the last 24 hours. Atrium, which hit an all-time high of $ 2050 on Saturday, has lost about $ 200 since then and is currently trading below $ 1,900.